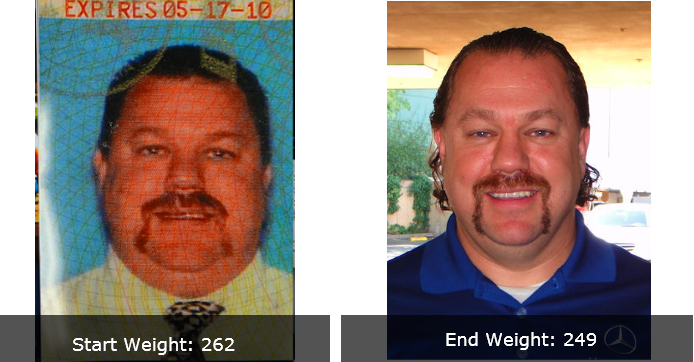 As the service manager for Walnut Creek Mercedes Benz, Alan did not have a lot of free time for exercise. After being diagnosed with Type 2 diabetes, he had made several futile attempts to lose weight and get off of his diabetes medication.  During one particular attempt he had actually lost 30 lbs. in the Jenny Craig program. However, despite the successful scale weight loss, his diabetes status did not improve whatsoever. Dr. Transformation had Alan shift his effort and focus from weight loss to FAT loss.

“Especially for my family, I don’t want to fall victim to the long term debilitating effects of diabetes.”

His goal was simple: Get completely off his diabetes medication and improve his overall health status despite his busy work schedule.

Alan indicated from the very beginning that he was not interested in a traditional exercise program structured around weight lifting and treadmill / elliptical workouts because in the past he had found himself becoming bored very quickly with repetitive activities. So for the exercise portion of his program, Dr. Transformation had Alan join L.A. Boxing (Brentwood) and participate in cardio / boxing classes at least 3 days per week.

After having Alan’s metabolism measured by MetabAcheck, Dr. Transformation created a personalized low glycemic diet plan and set nutritional targets for Alan which would support his goal of maximum fat loss while still supporting muscle growth.

“I will never forget the day my doctor confirmed that I no longer needed to continue taking the medication for my diabetes…..thanks Dr. Transformation!”

For the first few months Alan followed his Transformation nutrition plan and participated in general L.A. Boxing classes three times per week. By his third month he had dropped over 4 inches off his waist and even more importantly was seeing significant improvements in his blood sugar levels. More excited than ever with his initial results, he began taking Brazilian Jiu Jitsu classes and mixed martial arts sparring!

By the end of his sixth month, Alan had dropped a total of over 6 inches off his waist, and almost 35lbs. of pure fat. Remarkably, despite the massive amount of fat loss, Alan’s scale weight had only dropped 13 lbs. because he had simultaneously added so much new lean tissue (muscle/water) to his body.  In the past, this small scale weight change might have been discouraging. However, in this case it was not because his doctor confirmed after only six months in Transformation’s program that he no longer needed to continue taking his diabetes medication. Success!!

On March 30, 2007,  Dr Transformation set out to regain the muscle he had lost due to muscle atrophy secondary to a right shoulder rotator cuff injury and subsequent surgery earlier in the year. His specific goal was to increase his overall muscle mass while simultaneously dropping at least 20lbs. of pure fat. His goal was to accomplish these tasks all within a 12 week time period.

“After months of inactivity following a major shoulder injury, surgery, and recovery, I felt like I was being smothered by a thick layer of fat. All I wanted to do was escape!”

Based on his aggressive goals, Dr. Transformation implemented a minimum exercise routine of at least three resistance and three 20-25 cardio workouts per week. Based on an initial metabolism test, he created nutritional targets that would ensure plenty of calories to support his goal to increase his muscle mass and metabolism.

After only 12 weeks,  Dr. Transformation had lost a whopping 5 1/2 inches off his waist, 13lbs. on the scale and approximately 25lbs. of pure body fat! Even more significant, over that same 12 week period he had managed to increase his metabolism by almost 250 calories per day!! (read more about Dr. Transformation’s metabolism change)

“I had worried that after a severe shoulder injury I would have trouble getting back in shape. I learned that getting great results and losing fat is really all about a strong nutritional foundation and eating to feed my body’s requirements, not “dieting”.”